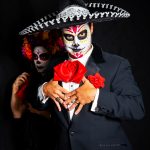 Each of the shows is also a fundraiser for the Crockett High School’s Mariachi de Oro, who provide live music for the show.

For more than 15 years Crockett High School’s Mariachi de Oro has been the premiere high school Mariachi ensemble in Austin, TX. Since 2014 the program has been under the direction of Ron Hare. They maintain a very busy performance schedule with upwards of forty formal and informal performances each year. Mariachi de Oro have performed for/with two gubernatorial inaugurations, local television stations, a Latin Grammy winner and numerous national conferences. Donate to this awesome program now!