Howdy from The Hideout Theatre in Austin, Texas.

This July we’re launching an ambitious new show called The International Improv Experience. A cast of Austin Improvisers will be issued challenges and interact with improvisers from all over the world. 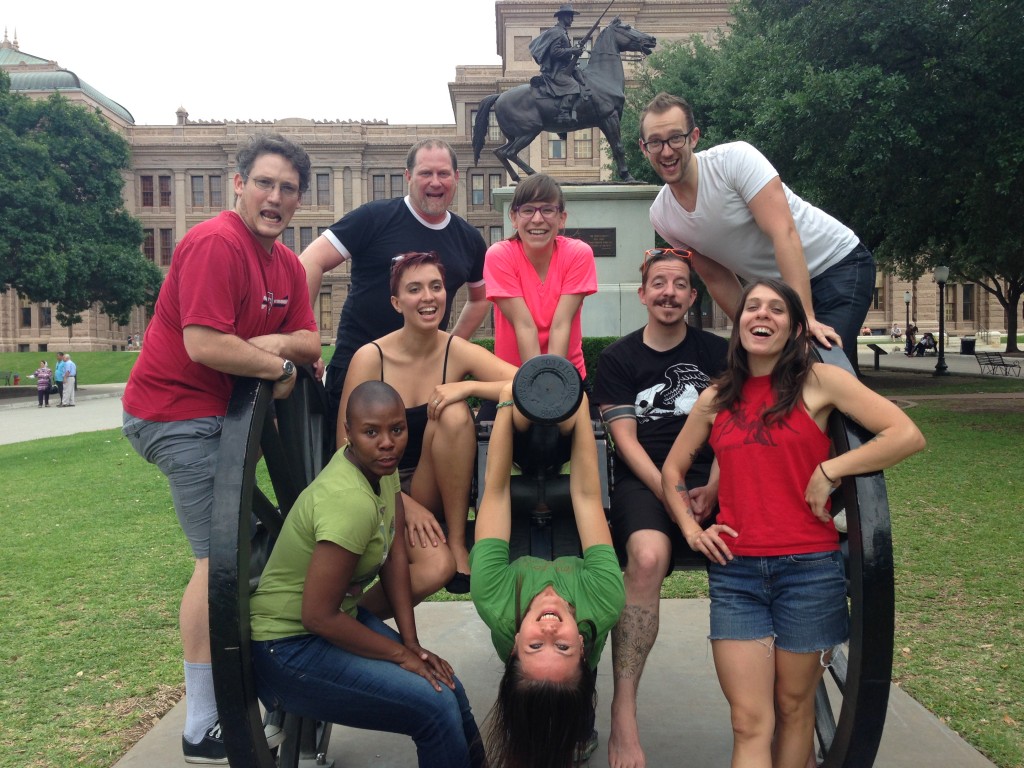 That’s where you come in.

The concept is this: You’ll record video or audio challenges of various types that we’ll then play during the show for the improvisers to complete. The more your videos show off what makes either your country or your improv group unique, the better.

In return for your help, you’ll get the following:

1. We’ll list your theatre or company as a partner on our poster, website, press release, and other promotional material
2. We’ll  do our best to record the shows so you can see how your challenges were used.
3. We’ll link out to your theater or group on Facebook posts and thank you publicly

Interested? As soon as you have decided, send Roy Janik an email at roy@hideouttheatre.com with an official “We’re in!” and we’ll start listing you as a partner theater/group immediately.

1. Upload completed videos somewhere where they can be easily downloaded in their raw format. We recommend Vimeo.com or Dropbox.com.

2. Let Roy know as soon as each video is finished. Don’t wait until you’ve filmed them all. We’d much rather have some videos now than all the videos a month from now.

3. The most important thing is that the videos be well-lit and have good sound. Err on the side of shorter videos as well. Filming on your iPhone/Android should be fine. All of these example videos were shot on an iPhone 5.

Here are the things we’d like filmed. If you have ideas that are NOT on this list, by all means film them and send them to us.

Record a brief video of as many people from your group as you can get together in one place saying “We are ________. Welcome to the International Improv Experience!”

If your group often speaks in another language, record the welcome again in that language.

Introduce yourselves and your group and your work. The content is up to you. You might talk about your groups history, the type of improv you like to do, or just the personalities of the people involved. show us around your space.

Just remember to gear this towards an audience of people who only have the barest idea of what improv is, so please explain any insider terms like ‘long-form’ or ‘game’ in detail.

Give a very brief training in how to speak in your accent. Making the cast repeat after you could be good. Challenge the cast to do a scene using their new excellent accents.

Teach the cast around 10 vocabulary words unique to your region in rapid succession. Challenge them to use them all in a scene.

Do as many of these as you like! Make a video in front of famous landmark, feature, or just something that is super indicative of your country/region. Tell us a little bit about it, and then challenge the cast to some sort of scene or game related to it.

Do you have unique animals in your country? Awesome. Show us one. Tell us all about it, and give us a challenge related to it.


1st half of a scene

Just film an improv scene. We’ll cut it in half at some point, and just play the first half. Then the cast will have to take your positions and improvise the second half.

One person talks directly to the camera, improvising half of a conversation, in character. Leave space for someone in the cast to improvise the other half.

If your group (or enough people in your group) speak a language that is not English, do a scene in that language. Leave enough space after each line of dialogue for someone in our cast to ‘translate’ the line into English. Big physical actions are good, since we probably won’t actually know what you’re saying.


Apologies for our poor Spanish. 🙂

Film a slow, leisurely walking tour of something, like a museum or a park, or whatever. Stop and linger on objects. Record audio if you want to, but it’s not important. We’ll cut out the audio and provide a tourists’ audio tour guide commentary track.

Put together a slideshow of images that are typical to your country / region. Or, alternately, a slideshow of pictures of your group having fun / posing in random configurations around your city. The cast will use the images for a ‘slideshow’ game where they talk about their made-up vacation.

Do as many of these as you like. One person talks directly to the camera and tells a true story. Either about something that happened to you that is very typical of your country, or a time you visited America, or anything else you think might be in keeping with the show.

Teach us a game or a type of scene that either was invented in your city or that you play a lot. Demonstrate the mechanics and show us enough to get the point across.

Towards the end of the show, we’re going to do a longer story for the audience. Tell us about a story-telling tradition from your country. For instance, in Australia, there’s the concept of Dreamtime. A description (lifted from Wikipedia) might be: “In the animist framework of Australian Aboriginal mythology, Dreamtime is a place beyond time and space in which the past, present, and future exist wholly as one. Tribes-people could enter this alternate universe through dreams or various states of altered consciousness, as well as death, Dreamtime being considered the final destination before reincarnation.”

We’ll then use that to go into a longer piece.

Teach us one of your favorite warmups. If it was invented by someone in your city, even better.


Thank you so much. Again, if you have any questions at all, please email Roy at roy@hideouttheatre.com