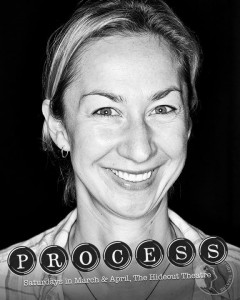 Having recently moved back to Texas after 5 and a half years in my native New York City, I’m in the market for one of those bumper stickers.

I first came to Austin as a UT undergrad in 2001. I found my way into the burgeoning improv scene during my freshman year of college and am fortunate to have belonged to the community (from near and afar) for more than 10 years. Though New York City will always have a claim on my heart, I feel more at home and at ease here in Austin, in the sunshine. Over the years, the Austin Improv community has furnished me with many dear friends, strengthened my sense of self, enriched my sense of humor, deepened my appreciation for the power of storytelling, clarified my day-to-day worldview, and led me to my husband!

The recipient of all these gifts, I have the further good fortune to be a cast-member in the March/April mainstage show, Process: An Unscripted Scripted Play, directed by aforementioned husband. The cast has been rehearsing for the show for almost two months now and I continue to be blown away by the level of commitment, creativity, talent, openness, and positive energy that exists within the group. Being part of this show contrasts sharply with my experiences doing improv in New York City—where comedians and actors go to make it.

Trying to pursue theater in New York, in my limited experience, involves lots of networking, hobnobbing, capitalizing on your connections, pounding the pavement, selling yourself the right way to the right people, and performing shows at weird times on weeknights in the backrooms of bars to audiences of 5-8 people. I feel incredibly grateful to be back in a community where folks are more interested in making compelling art together than they are in making money. I am awed and humbled and excited by how much Austin Improv has grown in the last five years, how it continues to expand to include more people and more forms. I feel lucky to be a living, breathing part of it again—no longer a sad Facebook stalker 1,700 miles away.

One of the best things about Process (in which we put up a “scripted” play from auditions through opening night) is that we get to poke some fun at those people who take theater too seriously or are overly concerned with the business. I met some people like that in New York and prefer playing them onstage to playing with them onstage. So, thank you, Process cast-mates for inspiring me with your talent. Thank you, Hideout Theatre, for continually experimenting with new and exciting formats. Thank you, Austin audience members, for coming on down to see the show and welcoming me back to the stage I so sorely missed.

Process runs on Saturdays in March and April at 8pm. Get your tickets here.