Charlie Hoehn is one of our current students (he’s starting Level Six tonight with Valerie Ward!). He recently published a book entitled Play It Away: A Workaholic’s Cure for Anxiety and improv classes at the Hideout get a shout out at the end of this excerpt:

One night, while I was looking at a friend’s book collection, I stumbled upon an interesting title — Play: How it Shapes the Brain, Opens the Imagination, and Invigorates the Soul, by Dr. Stuart Brown. I sat down and read the book in one sitting.

The message of Play hit me like a brick wall. I could finally see how I was creating my own suffering:

I was constantly depriving myself of play! 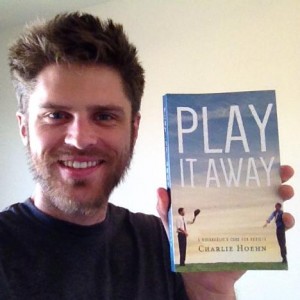 The problem was my state of mind. For years, I’d mentally blocked myself from having guilt-free fun. I was a workaholic who was extremely adept at rejecting everything that wasn’t productive. I couldn’t enjoy any form of leisure if it didn’t earn money or help my career.

I didn’t allow myself to play because that meant I wasn’t working. But I couldn’t really work because I always felt tired and jaded. Even after I finished working for the day, I’d still check my email a dozen times between midnight and 2:00AM. I knew it was dumb and “What could be so important?” and “You need your sleep,” but I did it anyway. I had to stay connected to my work. I was oblivious to the fact that my nerves were being frayed every waking hour, and that I desperately needed fun face-to-face time with real human beings.

What made matters worse were my unhealthy routines:

– Sitting and staring at screens for 12 hours a day

– Binge drinking with friends on the weekend

My weeks were a cycle of mental over-stimulation, physical inactivity, social isolation, and emotional numbing. I didn’t get outside. I didn’t move. I didn’t sleep. I didn’t play with my friends. I just kept working.

Even when I was technically “playing” with my friends, I always felt guilty. My mind was elsewhere: what I did wrong in the past, how I was compromising my future, and how I was wasting the present. I was incapable of being in the moment. I had to get back to work.

What would the world do without me and my important work?

Without realizing it, I became very serious and intense, even though I’d never been that way in my entire life. I approached everything with this Life Is Serious mentality…

Somehow, I managed to suck the joy out of every single aspect of my existence. I was so intensely critical of life that I blocked my ability to enjoy it.

I was convinced that the real world was a miserable grind for adults, and that I needed to work even harder if I wanted to enjoy life.

Someday, I’d be rich and permanently successful. And when I reached that point, I would allow myself to stop worrying and be happy.

A lack of play should be treated like malnutrition: it’s a health risk to your body and mind.
– Stuart Brown

Have you ever witnessed a little kid working out on a treadmill?

Or meeting up with a friend to chat over coffee?

Or attending a networking conference to hand out their business cards?

Hell no! That stuff is LAME and BORING. If you saw a kid doing any of those things, you would laugh and wonder what was wrong with them.

Kids don’t run to get in shape; they run to feel the wind in their face and the grass beneath their feet.

Kids don’t chat over coffee; they make jokes and play games with their friends.

Kids don’t network; they bond while they’re having fun together.

And that’s what I’d forgotten, what I’d been missing, all along.

The week I decided to start playing again, a friend introduced me to his buddy David via email. David replied with the usual request, asking if I wanted to grab coffee. I paused for a moment, then wrote back:

“Hey David, it’s nice to meet you. This is an irregular request, but do you want to play catch at a park? I haven’t done that in awhile and it’s a lot more stimulating than sitting around and drinking coffee.”

“SURE THING. Playing catch sounds like a f*ing blast! I’ll ping you in a bit and if we can’t do it today, let’s play ball tomorrow!”

And it was a blast. Playing catch removed the pressure that’s so common in business meetings, where both sides are subtly trying to impress each other. Instead of putting ourselves through the usual nonsense, we got to enjoy our game on a warm summer day in the park.

I felt rejuvenated after my first play meeting. I gained a surplus of happiness, which spilled into the rest of my day. Suddenly, I found myself teasing bored cashiers, being more flirtatious, and cracking inappropriate jokes. Just a couple hours of guilt-freeplay reduced my anxiety and increased my confidence.

I had a date scheduled the following night. Rather than trying to be on for hours at a time, I decided to think of the night as a series of spontaneous games.

It worked. Our energy was never uptight because we played around the entire time. We ordered whisky Shirley Temples, shot cherry stems through our straws at random people, and cracked jokes about the karaoke singers. There were no attempts to be cool or charming, or thoughts about where the date might take us. It was all about finding ways to make the moment fun.

That was how I wanted all of my meetups to be from that point forward. I just had to ask myself, What games can we play together?

My friend Tucker and I started playing home run derby every Saturday. We’d drive over to a high school baseball field with a bucket of balls, a few bats, and our gloves. One of us pitched from behind an L-screen (the net that protects the pitcher from line drives) while the other person hit. We acted like little kids; whooping and hollering each time we hit a home run and talking trash about who was the best hitter.

I wanted to surround myself with more fun people who cracked me up and treated life as a game. If I was always around friends who wanted to play, I knew my anxiety would fade away.

That’s when I signed up for something I’d always been too scared to do: improv comedy classes.

For three hours each week, I thrust myself into situations where I was guaranteed to look foolish. At first, I was really nervous and slightly mortified. My heart beat rapidly and my voice quivered whenever I performed in front of 15 other people. But by the end of the first month, improv was a tremendous source of strength for me. And it was the most fun I’d had in years.

All of us were there to play, to go with the flow and say “Yes!” to every ridiculous scenario we were thrown into. We all looked like idiots, but after a few classes, none of us cared. The voices in our heads that constantly judged and graded us

for not being perfect were silenced. We became desensitized to our fear of failing because we all screwed up, all the time. And it didn’t matter. We just leaned in, adapted on the fly, and treated every mistake like it was intentional and perfect.

I still remember my first great scene. I crawled out to center stage on my stomach, acting like a prisoner who was about to make a break for his freedom. My partner was supposed to mirror all of my movements, so she crawled out beside me. When we looked at each other in surprise, we launched into an argument about who would escape first. We couldn’t yell at each other (we didn’t want to get caught), so we just aggressively whispered the whole time. The longer we argued and delayed our escape, the funnier the scene became. Our classmates cracked up as the tension mounted, and our teacher finally ended the scene by saying, “I could watch this all day.”

Every improv class reminded me of the father-son baseball games from Little League. All the kids looked forward to that one game each season because, for a few glorious hours, there were no critics or coaches. Everyone was there to participate and have fun. If someone made an error, no one yelled because we were too busy laughing. The outcome didn’t matter. It was true play.

Improv wasn’t about keeping score, or self-improvement, or even acting funny. It was about being in the moment and letting go. And for a few glorious hours, I didn’t need to be my anxious, workaholic, perfectionist self. I could just play around and have guilt-free fun.

And that was how I approached life before anxiety. I never used to worry too much about being successful or surviving in the real world. I just embraced the moment, knowing it was another opportunity to have fun with my friends. Life was a game, and I always allowed myself to play. I wanted it to be that way again.

Then I realized… it could be. In fact, it always had been.

You can buy Charlie’s book Play It Away: A Workaholic’s Cure for Anxiety on Amazon.com

And you can Play it Away at the Hideout Theatre in improv classes starting every month.

Family Friendly! A variety of comedic shorts, based on the late 90s show KaBLaM!