[Most people have no idea of how we go about preparing for improv shows. A common comment I hear from well-meaning friends when I mention being at an improv rehearsal is “Rehearse!? But it’s improv!”

Peter Rogers, of The Dancy Street D’Orchestra, takes us behind the scenes in this blogpost to tell us all about just how much work and sweat went into his troupe’s current musical headlining run in The Threefer.

Take it away, Peter!

My favorite improv formats are the ones that are a little bit impossible. 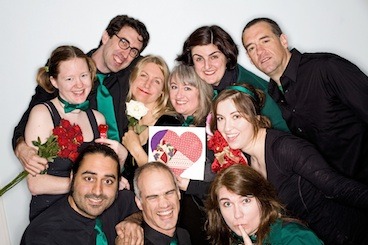 Your troupe decides they want to do this or that kind of show, and it sounds really exciting, but you know for certain if you tried to perform it that night, the show would be a catastrophic mess. So you all spend your time doing research, and picking useful exercises in rehearsals, and tweaking the logistics of the show… but the whole time, you’re not even sure you’re going to land on solid ground. Maybe this was too much. Maybe your troupe has decided on something too ambitious.

Shana Merlin talks about how, when you’re picking a show format, you’re really picking *two* shows. The first one is the show that the troupe is doing. What are you going to learn, what skills are you going to develop, what’s the costuming and lighting and set design that’s going to make this show work? The second one is the show that the audience sees. What’s the poster going to look like? How do you convince the audience that this show is unique? And what’s their experience watching the show?

To my mind, for both of those, you want that show that’s a little bit impossible. As a performer, I never get better at improv without shows that force me to get better at things, and I get a bit lazy and bored without the focus of “We have to do these things before the show goes up.” As an audience member, I want to see shows that are new and different — and frankly, it’s exciting if I’m watching a show that could completely collapse because of its degree of difficulty.

The day after Christmas, Roy told Dancy Street that we’d won the headlining slot for the Hideout’s Thursday-night Threefer in February. After the cheers and celebratory drinking, the troupe set to figuring out what kind of show we wanted to put on at the Hideout.

We knew we wanted a big promotional push, so that the Hideout wouldn’t be stuck with empty houses and a lingering sense that they’d made a big mistake.

We knew we wanted guest stars for the run. People had asked about guesting with us for some time, but somehow it had never worked out. Guest stars worked from a marketing angle, and it gave us a chance to share the run with our friends.

And… we knew we had a month to get all this together.

We knew that one month wasn’t enough time for us to, say, take on an entirely new musical genre, or invent a completely new musical format — especially while we were simultaneously organizing the marketing push and lining up our guest stars.

Our solution was simple: we were doing a run in February, right? So we’d do something Valentine’s-themed — for that run, we would improvise a series of musicals about love.

But there was a problem: Dancy Street never did love stories.

Our very first show, back in April, was centered around a wedding. And then, we immediately ran just about as far from love stories as we could. We improvised musicals about drug-smuggling toy manufacturers, or oil-rig safety inspections, or fifth-grade amateur ghostbusters — but no romantic subplots. We never did anything remotely like “boy meets girl, boy loses girl, boy gets girl back again.” We never sang any love songs — odd, given that love stories make up maybe 75% of scripted musical theater.

There was something almost neurotic about it.

And yet here we were, getting ready for our Valentine’s show. So this show was a little bit impossible, not because of some tricky-and-intricate show structure, or some difficult-and-obscure genre, but just because of its theme. We’d done tons of musicals, but what was this scary “love” stuff?

So that’s where we went with the rehearsal process. We had one rehearsal devoted to just getting comfortable with intimacy onstage. We had one just devoted to love songs. We refreshed our memory serenading audience members. And we did lots and lots of run-throughs where we worked at applying all of this to little “rehearsal musicals” that nobody would ever see, all the way up to the (sold-out) premiere.

And, of course, we keep triangulating as the run goes on. Every week, we bring a new guest star up to speed, we perform another run-through, and we do a few more exercises that nudge the show a little closer to what we’d envisioned. Any improv show keeps evolving as the show goes on. Typically, by the time you’ve figured out exactly what the show wants to be and the show has settled into something complacent and stable, it’s time to move on to the next one.

So, we’ll run “Objects of D’esire” through the end of the month. After that, we’ll guest with Girls Girls Girls as the rival school for the ‘season finale’ of their “GGGlee” run.

And then?… then we’ll sort out what kind of improvised musical we’re taking on next.

Hopefully, it will be slightly impossible.

[Catch Dancy Street in The Threefer every Thursday in February. Get your tickets here]