There are no Nothing and Everything performances scheduled at the moment.

Some of the tightest, funniest, deepest improv work I’ve ever seen from a team of absolute all-stars.
– Steve Moore, Physical Plant Theater

“Nothing is funnier than unhappiness.” – Samuel Beckett, Endgame

Anton Chekhov is arguably the most celebrated playwright since Shakespeare. Mostly known for his hundreds of short stories, this giant of Russian literature cemented his reputation with four major plays written in his final decade: The Seagull, Uncle Vanya, Three Sisters, and The Cherry Orchard. Chekhov is highly regarded for launching theater into the 20th century by writing characters so rich they spark hours of conversation and debate among both scholars and enthusiasts. Yet in spite of these accomplishments, readers and playgoers commonly utter the complaint that “nothing happens.” 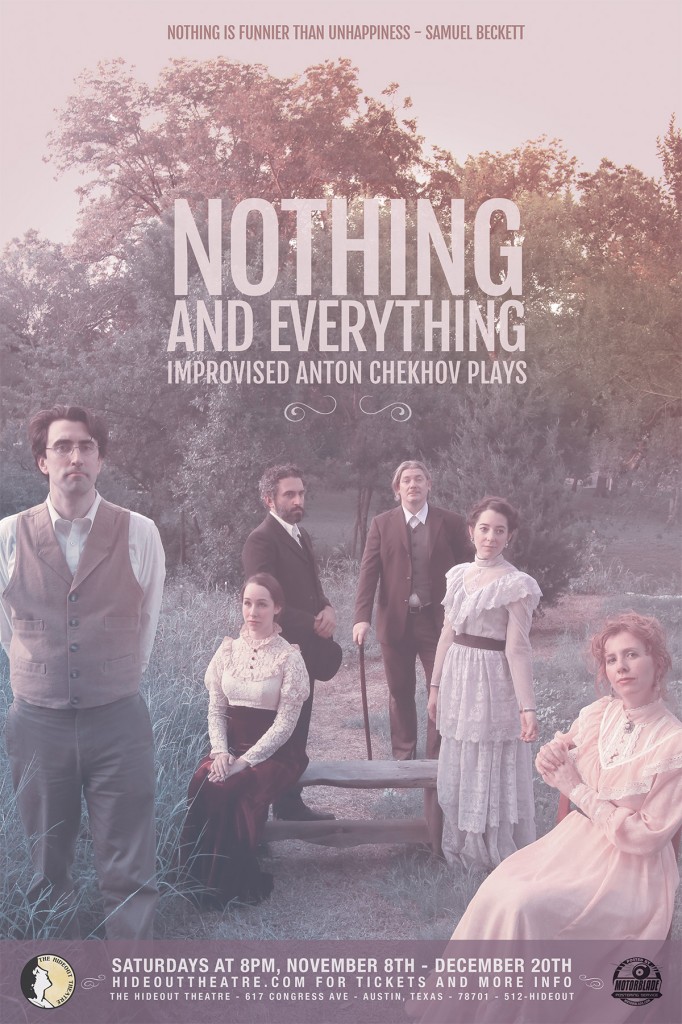 The Hideout Theatre presents Nothing and Everything, an improvised show whose title is inspired by the common reaction to these plays. A cast of eleven of some of Austin’s most experienced improvisational actors will make up original tales of idle, turn-of-the-century Russian provincial lives.

They’ll explore new Chekhovian worlds, in which nothing seems to happen except the timeless things normal people struggle with and make light of every day: love, death, happiness, suffering, God, fear, and longing. Starting with details provided by each evening’s audience, a small community of real people with hopes and fears will emerge into a full night of comedy and tragedy. Comedy? Yes, that’s right! Much like our own lives, the unhappiness of Chekhov’s subjects are surrounded by unexpected humor in unexpected places.

Don’t be afraid to laugh!

Animal Buddy Improv with Cooper & Reich, Hills to Die On, and Build-A-Bexar

Mighty Morphing Teen Squad! – Power up with these rangers!