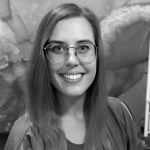 Kayla started doing improv in 2010, performing regularly throughout Austin before heading to Chicago in 2013. There she studied and performed at The Annoyance and iO Chicago, including as part of the psychedelic improv show, Ayahuasca Baby. She has created and performed original comedy at the Chicago Fringe (Artists’ Pick – Best of Fest, 2014), People’s Improv Theater in NYC (SoloCom Festival, 2019), and at theaters throughout Chicago. As a professional social worker she has applied her improv skills as a DEI facilitator, community organizer, improv instructor for Autistic youth, and in her current role as a mental health therapist in private practice.