A Review for Spirited just came out in the Austin American Statesman. Have a look:

Improvised theater is often a lot like a child’s imagination — the stories that emerge are filled with unexpected twists and turns, an eclectic array of characters, and a general disregard for logic or the laws of gravity. 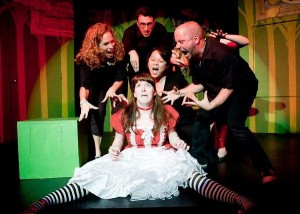 So it’s particularly fitting that The Hideout Theatre’s new show, “Spirited” running Saturdays through October 29th, follows a little girl’s adventures in an imaginative and dream-like world of animate objects.

Subtitled “Improvised Dreamscapes” and under the direction of Asaf Ronen, “Spirited” is inspired by the likes of Lewis Carroll’s “Alice in Wonderland,” Maurice Sendak’s “Where the Wild Things Are,” and the work of Japanese manga artist and director Hayao Miyazaki. As a result, the show is both the most family-friendly improv we’ve ever seen and the most imaginative.

On Saturday night, Halyn Erickson donned a frilly red dress and took us on her journey to a land of rocks, geckos, talking canoes, and surprising prophecies. Aided by a particularly large cast (there were 12 improvisers on stage this Saturday), Erickson instigated a human whirlpool, a high-five induced jailbreak, and a delightful rainbow dream sequence.

The whirlpool, rainbow, and a skit involving flaming rocks wouldn’t have been half as exciting if it weren’t for the animated lighting and sound design of Neal Tibrewala and David Zimmerman. The lights and sound in “Spirited” are just as energetic and involved in the story’s development as the actors are themselves.

As can happen with improv, Saturday night’s plot was initially a bit convoluted. Though the performance was clearly spontaneous and frequently amusing, the audience suggestions for both a vice and a virtue of childhood never really materialized as thematic devices or plot points. Eventually, though, storylines emerged as Erickson skipped her way into a series of shenanigans in the unfamiliar world. The highlights included animate jailhouse bars going on strike, flying a dream kite to catch pleasant dreams, and rhyming friendship competition that ended in cake for everyone.

Featuring friendship and hugs, rainbows and puppies, cake-filled dreams and calculus-induced nightmares, “Spirited” is a family-friendly romp into childhood that will leave you smiling as you skip out the door.

Interested? Spirited runs through October 29th, with shows at 6pm and 8pm on Saturdays. Get your tickets here.