There are no Solo Improv Showcase performances currently available. 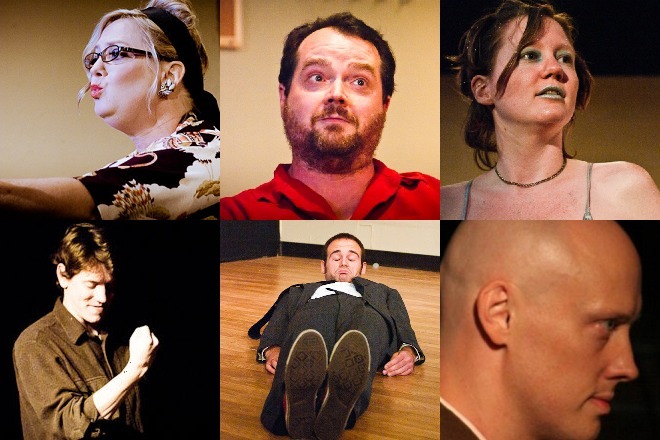 A star-studded cast of improvisers from The Hideout Theatre, ColdTowne Theater, Gnap Theater Projects, and The Institution Theater assemble to tackle the biggest challenge in improv: solo shows.

Get ready for an evening of performances without a script, without a net, and without anybody else on stage.

“Diva With A V” by Marci Spivey.
A faded star you’re sure to love almost as much as she loves herself.

“Todd, God, and the Devil.” by Todd Hart
Get a glimpse within Todd’s brain to see heaven and hell battle for his soul.

“The Creative Process” by Bryan (Lubu) Roberts
Bryan attempts to write a book for the audience. However, he finds the process of actually writing to be a little more daunting than he thought.

“Day In The Life” by John Buseman
John Buseman uses clowning and physical comedy to explore a day in the life of an ordinary household object and all the trials and tribulations it faces.

“Revlis: Improv… FROM THE FUTURE” by Kristin Firth
Meet Revlis. She comes to us from a distant future. Here only briefly to exchange greetings, learn something about a different time, and maybe share a moment or two.

“Spices” by Shannon McCormick
The year is 1700. Shannon McCormick plays Cornelius Corneliuszoon De Vries, 100-year old Dutch explorer, merchant, privateer, and politician who regales the audience with the adventures of his youth, depending on how well he can remember them.

With musical accompaniment by Michael Brockman
Hosted by Marc Majcher