There are no Mischief Managed performances currently available.

At Last… An Improv Show Based on the Books That Shall Not Be Named!

At the Hideout, we’ve dabbled in improvising in the world of a certain boy wizard before, but we are finally giving the wizarding world its due with a full-on run of magical shows. 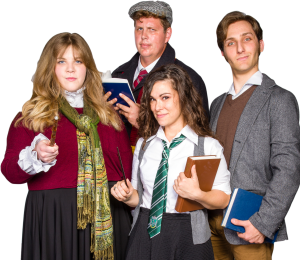 Every Saturday at 8pm in November and December, Mischief Managed will chronicle the adventures of modern day students at the venerable British School for Witchcraft and Wizardry.

Set in the time period between the defeat of Voldemort and present day, it features a mix of beloved characters from the books and all new students, menaces, and teachers.

Get ready to escape into a world filled with wonder, whimsy, humor, and magic!