There are no Fandom performances currently available.

The Hideout Theatre is inviting YOU to get in on the improv action. This January and February, Saturday nights at 8pm, we’re premiering Fandom: Improvised Fan Fiction in Your Favorite Worlds.

Each week professional improvisers will play in a different fictional world (Buffy the Vampire Slayer, Lord of the Rings, Batman, the Hunger Games, Classic Nintendo, Star Wars, Harry Potter and more) guided at every turn by audience suggestions, anecdotes, sarcastic comments and all the passion you have for these characters and stories. Help us plumb the psychological depths of Harry Potter, investigate the sociological implications of the Hunger Games, and have Legolas and Aragorn make out with each other at Mount Doom.

We’ll play classic improv games with your favorite characters, reveal deleted scenes, write alternate endings, and generally mess around with these beloved cultural touchstones. Every week will focus on a different fandom:

Come get your geek on in the most immersive live show of 2013! 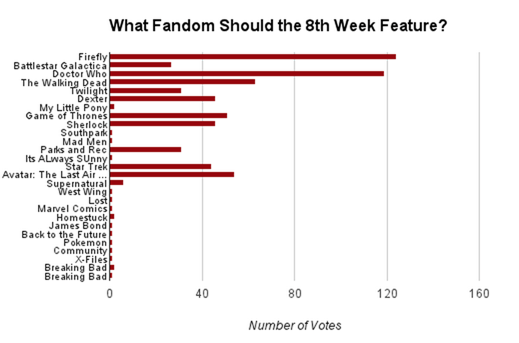 Note: The final FANDOM show is not wheelchair accessible as it is being performed in the Upstairs Theater.