There are no Boy Howdy performances currently available.

Now, for the first time, improv theater is in “full, living color”! Every Saturday evening at 8pm in November and December, The Hideout Theater presents the heart-pounding action and breathtaking scenery of Boy, Howdy!: Improvised 1960s-Style TV Westerns.

Inspired by the nostalgic era of 1950s and 60s TV Westerns like Bonanza and Gunsmoke, Boy, Howdy! captures the rich flavor of a bygone, historic era filtered through the principled and virtuous lens of mid-century America. 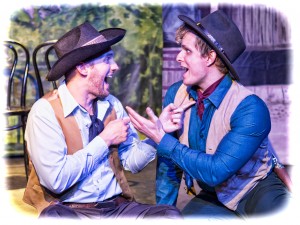 Starting with just a few suggestions, the entire show will be fully improvised every single night. Join a family of clean-cut cowboys and cowgirls fighting for love, land, and liberty against smooth-talkin’ city folk and backwater bandits.

Appropriate for ages 12 and up!