There are no A Bedtime Gorey performances currently available.

Get ready for holiday chills and laughs this November and December, as the Hideout Theatre presents an immersive theatrical improv experience unlike anything before attempted: A Bedtime Gorey: Improv Inspired by Edward Gorey. Edward Gorey is best known for his slightly unsettling yet chillingly mundane stories and illustrations. The talented cast of A Bedtime Gorey brings his unique visual style and unmistakable tone to life with full Edwardian Costume, somewhat ghastly makeup, and full body shadow puppetry.

As Gorey said of his own work, “I really think I write about everyday life. I don’t think I’m quite as odd as others say I am. Life is intrinsically, well, boring and dangerous at the same time. At any given moment the floor may open up. Of course, it almost never does; that’s what makes it so boring.”

A dozen of Austin’s finest improvisers embody that ethos as A Bedtime Gorey alternates between a frivolous party that’s somehow not quite right, and the nursery where the children of the partygoers are under total control of the Governess, who tells them terrible tales for their own good. Gorey’s unique combination of the horrible and the mundane is brought to life in an evening of general unease and great amusement!

Join us for a night of unsettling frivolity and nonchalant disaster this holiday season with A Bedtime Gorey: Improv Inspired by Edward Gorey. Saturdays at 8pm in November and December. 9 performances only! 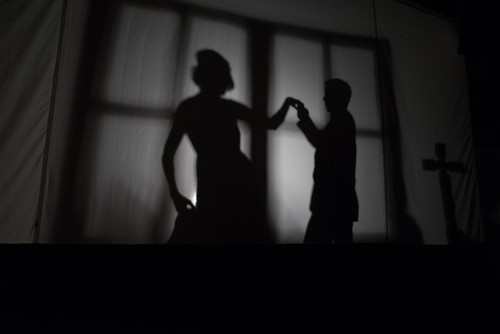 “More is happening out there than we are aware of.
It is possibly due to some unknown direful circumstance.”
–Edward Gorey