There are no solo singing sessions currently available. 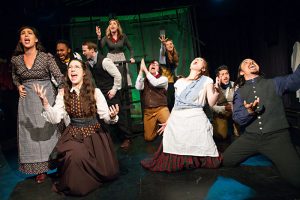 [Virtual Improv Notice: We’ve cracked the code on making solo singing work with a live musician in Zoom. Come check it out!]

Comfortable in duets but freak out inside when it’s time for you to step center stage and sing an improvised solo? Not sure what to do when you’re alone on stage? Wonder how to set someone else up for solo success and support them? Or just want to get reps in and add some tools to your musical improv toolbox?

In this workshop we will focus on mastering improvised solos, a scary thing that comes up a lot in improvised musicals. We will focus on the dynamics within the songs as well as the scene work leading up to the songs so that you can set your castmates and yourself up for success and fun. We will have lots of fun and it may even get a little emotional! It’ll be great! Previous musical improv experience required.

Mallory Schlossberg is a native New Yorker who moved to Austin in 2017. Since moving here, she’s performed in several Hideout Mainstages, including Death by Musical, Orphans!, and the Hallmark Holiday Musical. She co-directed Grand Misery and That! Big! 80s! Musical! and is currently co-directing Bad Guy Backstory: The Musical! She is one half of the musical duo Nice Jewish Girls. Mallory has 9 years of improv under her belt and was on a musical house team at the Magnet Theater in New York. When not teaching how to do made up songs, she is a copywriter by day, and devoted dog mom.

Megan Sherrod is an actor, improviser, teacher, and director. She is a member of the award-winning modern musical troupe Rook and a regular on the Hideout Theatre stage. She’s performed in such improv shows as the wildly popular Happily Ever After: Improvised Musicals Inspired by Disney Classics and the award-winning Nothing and Everything: Improvised Anton Chekhov Plays. When improvising, Megan enjoys connecting with audiences through the creation of varied characters – from playful and silly to grounded and vulnerable and everything in between. Megan’s improv specialties include: vulnerability, acting in improv, musical improv, stage presence, long-form narrative, space work, and intimacy. Outside of improv, Megan is a singer, voice teacher, theatre producer, and dog mom.

Your musician is Bryson Kemp!

Check the registration drop-down at the top of the page for upcoming sessions. When you register you will receive a Zoom link.