There are no neo-futurism sessions currently available. 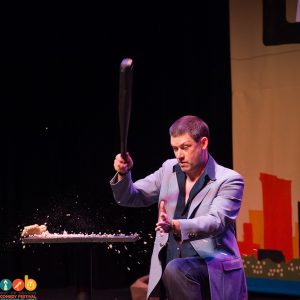 This one-day intensive delves into story and performance via Neo-Futurism. It is designed to strengthen a performer’s confidence while mining observation and experience. Based on the Neo-Futurist approach to creating new work quickly, it focuses on developing a heightened awareness and staging personal experiences in order to empower the participants and kickstart creativity based on observation. By drawing from these experiences and cultivating extraordinary ideas from the seemingly ordinary, participants learn how to weave perception with imagination to create powerful and unique storytelling on stage. *There are no pre-requisites to participate—you do not need to have any experience in writing, performing, or theater at all. You only need a willingness and curiosity to transform your real-life experience, thoughts and opinions into live performance.

Rob Neill is a New York-based writer & performer whose body of work includes avant-garde theatre, storytelling, traditional Broadway, and workshops in creativity. He is the Artistic Director and a founding member of the performance collective, the New York Neo-Futurists. His original plays have been performed at such experimental theatres as The Ontological, P.S.122, and The Public Theater. As an actor, he has performed in Broadway shows (“London Assurance,” “Peter and the Starcatcher”), in London (“The Cherry Orchard”) and regionally (“You Never Can Tell,” “Tartuffe”). Rob has taught a variety of performance and writing master classes around the country including at Brooklyn College, Improv Asylum, NYU, Hubbard Hall, Texas State, and University of Rhode Island. Rob studied at Grinnell College, LAMDA, iO Chicago, and the PIT in NYC, and he has worked on a variety of commercials, TV shows, and independent films.