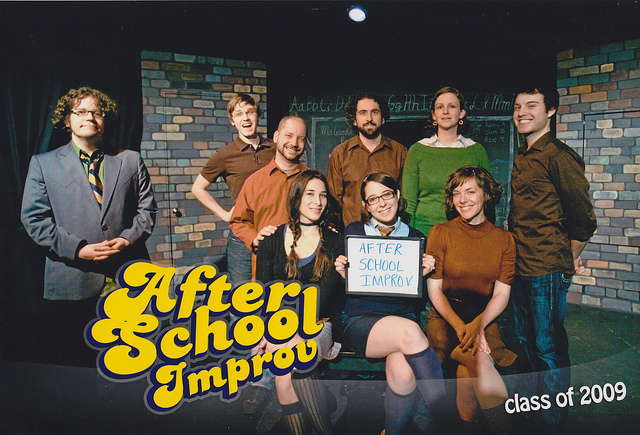 In March of 2012, The Hideout will be bringing back one of its flagship Mainstage shows: After School Improv. This time, however, the production will be cast entirely from Hideout students and recent graduates.

Hideout veteran Jason Vines will be directing the production.

The Hideout Theatre bravely tackles the issues your parents were too awkward to talk about in an improvised homage to the After School Specials we all grew up on.

Each episode addresses a problem that teenagers have faced since the dawn of time, in a melodramatic, cautionary, family-appropriate, ham-fisted way. Teen pregnancy, alcoholism, bullying, acne, dating… all of these topics are fair game.

In short, After School Improv is just like those “very special” shows you watched as a kid… except this time they’re funny on purpose.

The audition will be held on Sunday, January 15th from 4 to 7pm, and is open to all current students of The Hideout, or people who have taken one of the levels within the last year. Please email jason@hideouttheatre.com to reserve a spot. Also, put “After School Improv Auditions” in the subject line. If you have any questions about whether you are eligible, just ask Jason.

At the very least, save the date!

Our goal with this show is to run it as much like a Mainstage production as possible. That means rehearsals, costumes, tech, posters, etc…

Also, fun fact: the lockers in the green room are from the first production of After School Improv, and assuming we have some strong people in the cast, will likely be used again.

Again, if you’re interested, email  jason@hideouttheatre.com ( and put “After School Improv Auditions” in the subject line ).